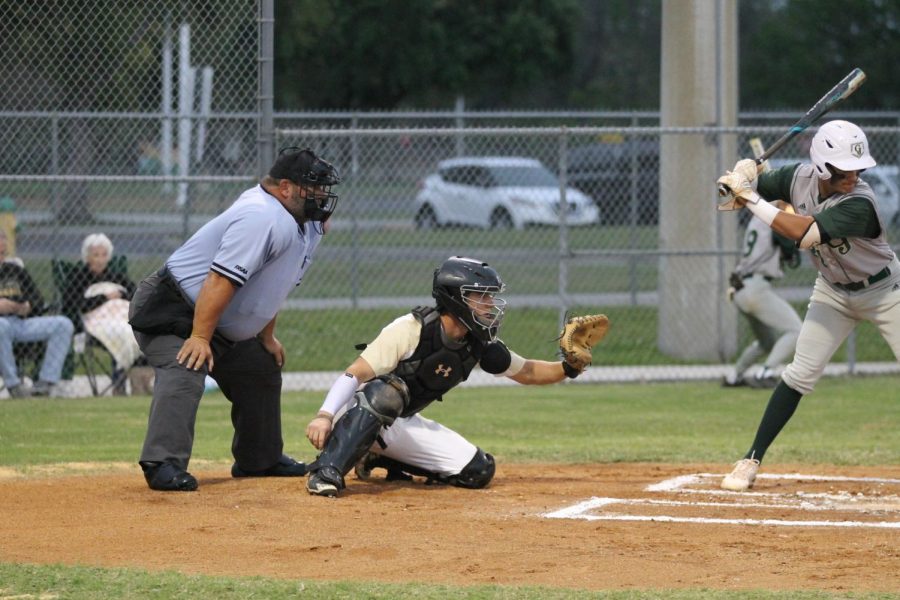 Hayden Cockman (’22) squats down and prepares to catch a ball thrown in his direction by one of the Mitchell pitchers.

Hayden Cockman (’22) has taken home one of this months’ Male Gregg Schindler Athlete of the Month award for his work on the baseball diamond.

Cockman is above the national average for runs batted in, games played, batting average, on base percentage, and runs, making him one of the team’s top fielding performers. His desire to play grew when he was young.

“[I decided to play baseball when] I moved down to Florida. I started playing when I was 11,” Cockman said.

This being Cockman’s first year at Mitchell, he grew into his leadership role for the Mustangs.

“[I have shown initiative] by controlling the field and calling out all of the plays. [My favorite position to play is] catcher because that is the position I play right now,” Cockman said.

With Cockman being a senior this season, he signed with the College of Central Florida in Ocala to continue his career at the next level. Coach Howard Chittum (FAC) nominated Cockman for this honor, and the coach that Cockman claims had the biggest influence on his athletic career.

“He got me committed and signed to the college I am going to play at next year. [I chose the College of Central Florida] because I felt at home,” Cockman said.

On March 16, the team played Cypress Creek in the Farm Bureau Classic and walked off to go to the final. The team’s energy during the last inning propelled them to victory.

“He was great defensively and got on base a lot. He had some really key hits. He has done a phenomenal job as our catcher, which is such an important position because you’re handling the baseball every play of the game,” Coach Chittum said.

After seven years in the sport, Cockman has learned quite a few lessons from playing baseball.

“Baseball has taught me a ton of discipline, and how to be responsible. You just have to work hard, be coachable, and do what other people don’t do,” Cockman said.

Congratulations to Hayden Cockman, this month’s Gregg Schindler Athlete of the Month.