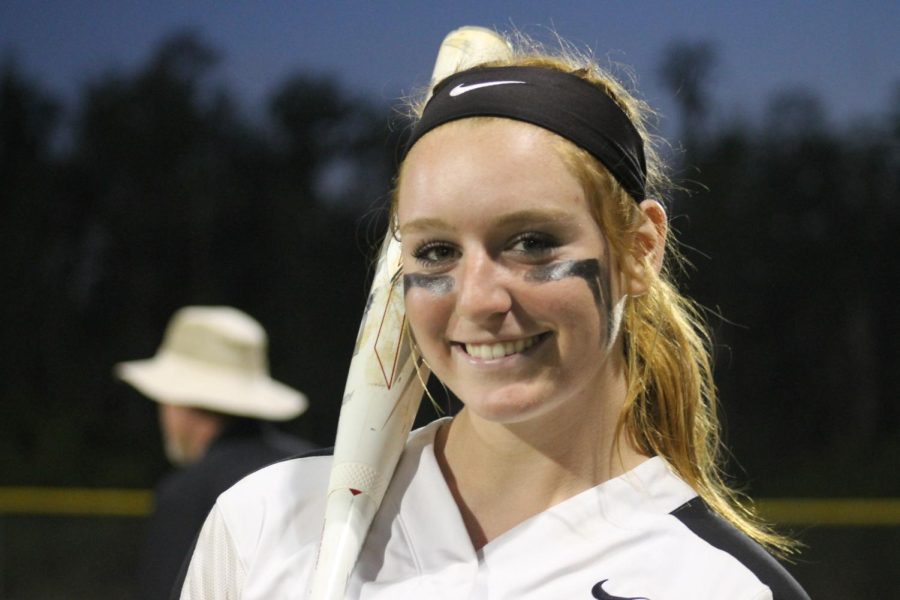 Kinnah Kreidler (’23) poses for a close up during one of the team’s home games this season.

Starting when she was younger, Kinnah Kreidler has always dominated the sport of softball. Multiple times, she was chosen for the West Pasco Girls Fast Pitch All Star team, a group of hand-selected players that traveled to other softball tournaments in the area. As she grew older, Kreidler used her experience from advanced teams such as All Stars to earn a position on a travel team, a group of girls who travel to tournaments all around the state, and sometimes even the nation.

Kreidler leads the varsity team with the highest batting average, on base percentage, and slugging percentage as well as the most home runs, hits, and stolen bases. She assists her fellow teammates with areas of the sport they grapple with.

“Just because I may have some more experience, I try and help them, especially if they plan the same position as me and we are working on that specific position, or even just little things [like] hustling on and off the field, and reminding them of some things,” Kreidler said.

While success for Kreidler has been achieved, she humbly understands that softball comes with its challenges, specifically the mental aspect.

“When you’re playing you have to be in the right mindset the whole entire game and you can’t get down on yourself,” Kreidler said.

Keeping a positive mentality, Kreidler has used four-time All American former collegiate and professional All Star softball player Sierra Romero as her inspiration for success.

“She was on the Michigan softball team and I’ve always looked up to her since I was little. She has always been one of my favorite softball players,” Kreidler said.

Over the past three years, practicing every day as a catcher on Varsity, Kreidler developed relationships with all of her teammates, including her coach Mr. Scott Bisbe (FAC) who she now shares a strong bond with.

According to Coach Bisbe, the catcher has a  0.474 batting average as of April 2. She has 18 hits in 38 at bats with 13 runs batted in, one double, one triple and three home runs. Kinnah has also thrown out two runners trying to steal. Her success on the diamond spills over to her teammates in the dugout.

“They hype you up all the time, especially when you get a good hit. It’s kind of contagious because then everybody starts getting hits, too,” Kreidler said.

With this dedication and commitment, at the age of 17 Kreidler committed to further her athletic career at the University of Tampa, a prestigious school with an elite softball program. Because the school is close to home, Kreidler will have the opportunity to explore the area she will live in in just a year.

“I get to go there all the time, even if it’s just going out to Tampa. I love being in the environment, it makes me so comfortable and happy,” Kreidler said.