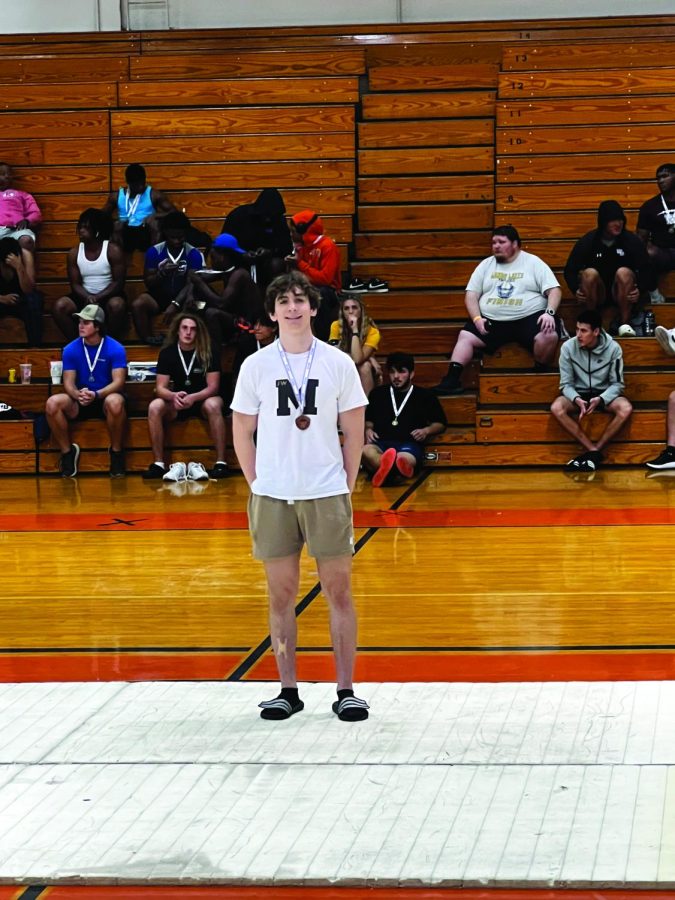 At the district meet on April 2, Jacob McLean proudly wears his medal from the tournament. McLean moves on to regionals April 6 – 8.

Jacob McLean, a weightlifter at J.W. Mitchell High School, was selected as a Gregg Schindler Student Athlete for April.

At the start of this year, Jacob McLean decided to join the J.W. Mitchell High boys weightlifting team after he had started lifting two years ago. His personal record as of now is  245lb bench and 205lb clean and jerk. As the weightlifting season came to a close, Mclean prepared for districts on April 2.

“I get a good night’s sleep and I normally have to cut weight so I don’t eat a lot before. I haven’t lost any of the meets, I’ve either gotten first or second for my weight class,” McLean said.

McLean’s first year on the team has been successful with him heading to districts. Because he did well at districts he’ll be heading to regionals and possibly states afterwards. He started weightlifting after experiencing self esteem issues.

“I used to be pretty insecure about my body so I wanted to change it though lifting and then I really just got attached to it,” McLean said.

“He’s a first-year lifter. He won conference and he’s done a great job this year helping and just being a positive role model for all the other students,”  Coach McFarland said.