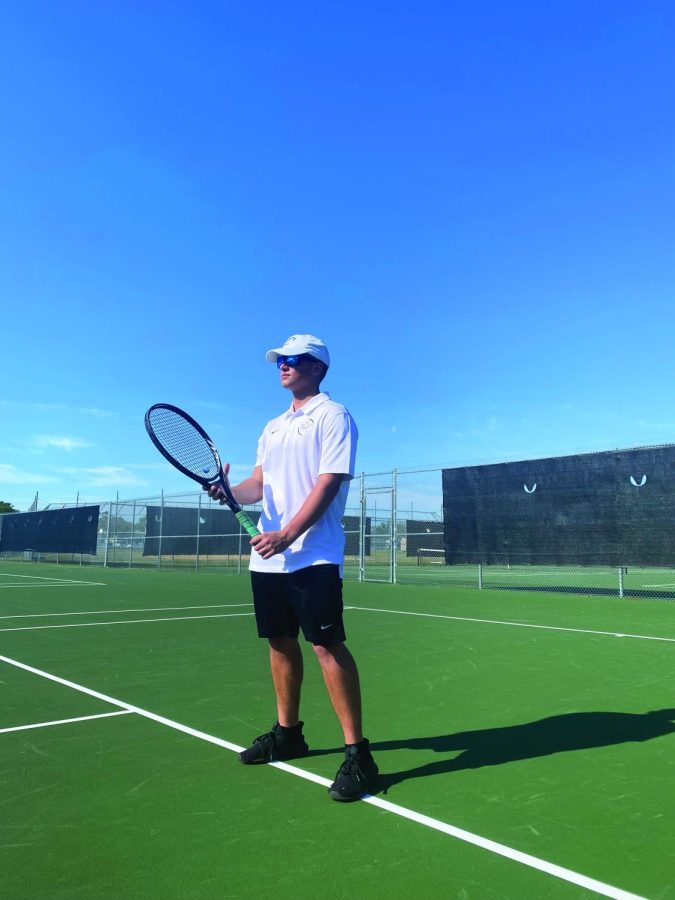 At warm ups before his match on March 3, Alex Cortier prepares to face his opponent.

As one of the captains on the boys varsity tennis team, Alex Cortier demonstrates his talent for the sport.

With leadership experience in band as well as NJROTC,  junior Alex Cortier earned a spot as one out of the three captains on the tennis team, after starting the sport just one year ago.

Starting to play tennis as a way to kill time before band, Cortier soon joined the tennis team along with his friends.

“Last year it wasn’t that big, so all of our friends just basically showed up and made the team, and got better from there. But this year we had an actual tryout where some people made it and some people didn’t,” Cortier said.

As the team developed, they were split into a travel team and a practice squad, leading the players to travel to different matches around different schools as well as park locations for their events. Cortier made the roster for the travel team.

“I feel like the longest trip that we’ve made is around an hour away from school, so we get a Student Related Absence for 6th and 7th period,” Cortier said.

Although Cortier was able to progress in such a short amount of time, he labels his inexperience as the most difficult aspect of the sport.

“Starting is like the worst thing because you’re behind everyone. But after a couple of months, it gets to the fun part,” Cortier said.

The team’s humorous relationship is the best part of the experience for Cortier, as he has been able to joke around with his teammates.

“We all make fun of each other. It’s kind of like a back-and-forth thing, but it’s all in good fun,” Cortier said.

As one of the team’s captains, Cortier realized that there needs to be a balance of structure as well as friendliness.

“It’s more of like keeping that friendship and relationship with the rest of the team, but still making fun of them, and poking at them but it’s that kind of fun relationship that really develops a team,” Cortier said.

Selected captain by Coach Dave Peterson, Cortier understands the importance this position holds as he recognizes the expectations his coach upholds.

“Our coach is big on leadership so he focuses on developing our character before we actually start playing tennis. Sometimes we have guest speakers come out and give a little lesson on leadership,” Cortier said.

Coach Peterson selected Cortier for this honor because he takes an instrumental role in leading the team.

“He frequently offers up his own practice time to help execute drills for others.  He is always prompt in his response to questions I have about the school and other players.  He can be trusted in confidential information. As a first-year captain, he is respected by the other players,” Coach Peterson said.

With Cortier humbly acknowledging his future holds only the spectator view of the sport, he continuously leads the team. As of Feb. 29, they have 2 wins against Wesley Chapel and Springstead, and one loss against Land O’ Lakes. Cortier will captain his team in matches throughout March and April.