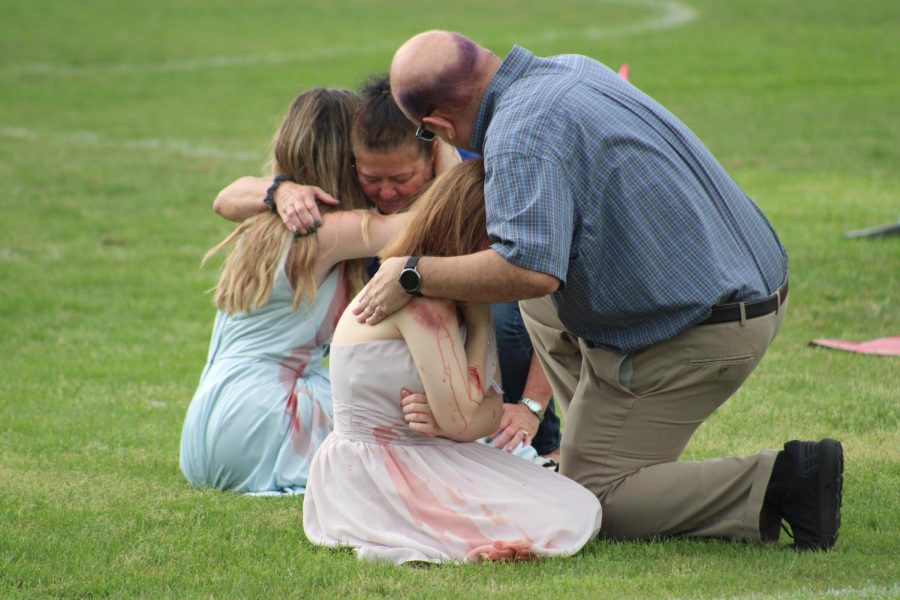 On wed. March 9, students gathered in the stadium for this year’s production of Prom Promise.

Every four years, the staff at the high school, along with the help of first responders and other authorities, express the consequences of being under the influence while driving. During the performance, the students watched as the actors from River Ridge High School, and the local fire department enacted a deadly crime scene that resulted from drinking while driving.

The story shown depicted a man and a girl leaving the prom while under the influence, the woman tried to warn the man that he should not drive, but he insisted that he didn’t have much to drink. Because of his thoughtless actions, the man took the life of an innocent woman who did not have alcohol in her system, along with injuring the friend he was driving with severely. The story enacted was for seniors and juniors this year to stay safe while driving to and from prom this year.

Liv Sylvester (‘23), a student who attended the Prom Promise watched the enactment appreciated the role the performace played towards this year’s safe drivers.

“Watching the staff, fire department, medics, and many other students at other schools coming together to perform this year’s Prom Promise, shows that many people are dedicated to helping keep drunk drivers off the road. Seeing the reactions that came out of my fellow classmates around me, I can tell that many of the students, and especially I, will be cautious this year when it comes to drinking while under the influence, along with helping other students who may be incapable of driving, ” Sylvester said.

In order for students to stay safe during prom, they should take in what they learned at this year’s production of Prom Promise and only drive if capable to do so. As we saw in the enactment put on by the actors, not only does driving while under the influence affect you, but also the people around you.