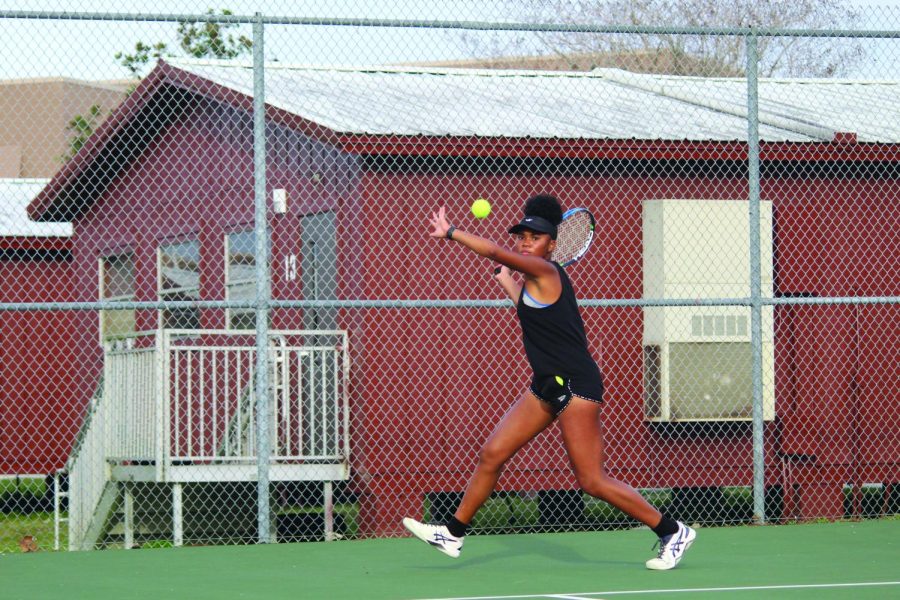 On Feb. 15, Ava Mance returns a volley against her Wesley Chapel Wildcat opponent.

This month’s female Gregg Schindler athlete of the month, junior Ava Mance, is known for her ability to lead on and off the court, and for her unmatched skills while playing tennis.

Mance, one of the younger of the four tennis team captains, leads her girls to victory by pushing them to play at their highest level.

“[As a captain I like] helping out the girls with certain strokes and skills, teaching them how gameplay works, working out plans with the coaches, and making sure all of the girls are updated about practices and games,” Mance said.

Mance began tennis lessons in the second grade when she and her family moved to Florida, and she has been playing ever since.

“[When I moved] I honestly was trying to find a new sport to play and my mom told me there were lessons offered at our neighborhood-community center, and I just kept going there,” Mance said.

Whether it be from family, coaches, or even professional tennis players, Mance has multiple role models to look towards for guidance and support.

“My family introduced me to watching pro tennis because before I wasn’t super serious about it, but my family kept asking me how practice was going and what I had been trying to improve on. My favorite player is Rafael Nadal. He just captivated me not just because he was an incredible player to watch on court, but he’s a person who strives to be a great role model, have excellent morals that keep him disciplined, and he cares about who watches him and what he can do to help others out who don’t have the same opportunities,” Mance said.

Mance’s school tennis coach Mr. Gary Zirbel selected her for this honor because of the way she handles the pressure of playing in the number one singles and doubles positions with confidence and focus.

“She looks forward to the challenge of playing the best player each school has to offer and understands that every match, win or lose, is a learning experience,” Zirbel said.

Mance’s other school tennis coach Mr. Rob Zilay (FAC) spoke on her abilities as an athlete, and as a leader.

“Ava’s dedication to refining her game in the off-season has paid off. She’s hitting with power, her serves are accurate, and she understands how to control the court to win points. Ava earned the captain title by demonstrating leadership qualities both on and off the court.” Zilay said.

In addition to her school course load and her time on the tennis court, Mance is also one of only three Mitchell High School students to be a member of Youth Leadership Pasco (YLP), and one of only 35 students selected in the county to be included in the program this year. YLP provides students with the chance to make connections and better their leadership skills, while also learning about the opportunities that Pasco County has to offer.

Congratulations to Ava Mance, one of  this month’s Gregg Schindler athletes of the month.