Get ready to rumble

Without seven of their varsity wrestlers, JV fills in their spots for the first match of the season. 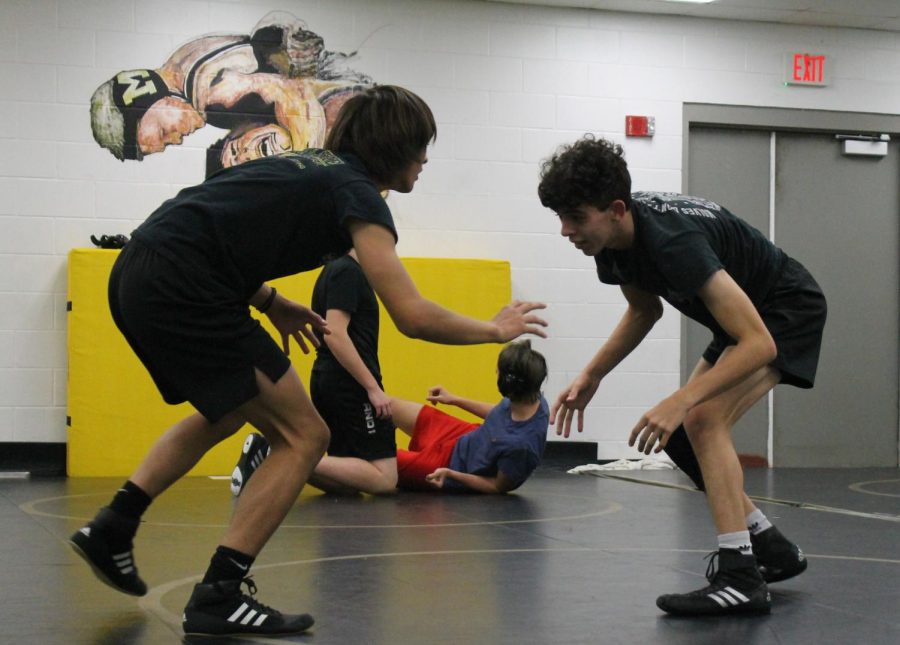 Captain Logan O'Leary ('22) demonstrates with Nicholas Mastracchio ('24) and gives tips before the team starts practicing each move on Dec. 2.

Starting off the season with a learning curve, the varsity wrestling team lost their first match against Sunlake High School on Wednesday, Dec. 1. The team was missing seven of their returning varsity wrestlers due to ineligibility with getting their paperwork in time or ineligibility with GPA, meaning many new JV athletes had to fill in their spots. Although they lost, the team saw this as an opportunity to learn and grow, giving them a newfound motivation for practices.

Coach Michael Loguidice had to put in new JV wrestlers in place of the more experienced varsity wrestlers during the match against Sunlake High School.

“We were without at least six or seven of our returning varsity wrestlers. Our JV kids had to wrestle and try to get as much experience they could yesterday. I kind of expected things to go the way that they went but I’m totally not mad or upset because there is nothing that you can really do about experience level. Overall, I’m just happy with the effort the younger JV kids showed that night,” Loguidice said.

David Nappi (‘24), a first-year varsity wrestler, weighed in at 145 pounds and wrestled the captain at Sunlake. The match ended with a score of 0-6.

“I felt defeated but then afterwards I talked to the captain of their team, and I ended up feeling more empowered because I learned more. I figured out that I need to get better at little things and that I’m just making mistakes. Overall, I felt happy with how I wrestled but not satisfied,” Nappi said.

Making weight for many wrestlers is the first obstacle when having tournaments or matches. Being even slightly a few ounces off weight can determine whether you compete or not. Colin Brown (‘24) was unable to make weight by being only .3 pounds over, meaning he was unable to wrestle that night.

“I was pretty disappointed with myself and annoyed, but I knew there was nothing I could do but make sure I made weight in the future. I would say that even though I could not wrestle, I still helped my teammates warm up before the meet and I cheered them on as they wrestled,” Brown said.

The team continues practicing every day after school from 3-6 pm. Their next tournament is at Manatee High School on Dec. 10-11.  “Luckily, we’re fortunate enough to possibly get at least some of them [varsity returners] back by then, but if we’re without them then it’s definitely going to be a tough tournament.” Loguidice said.