A time to remember

On Día de Muertos (Day of the Dead), people honor the death of their loved ones with food and music, in an effort to welcome back their souls. 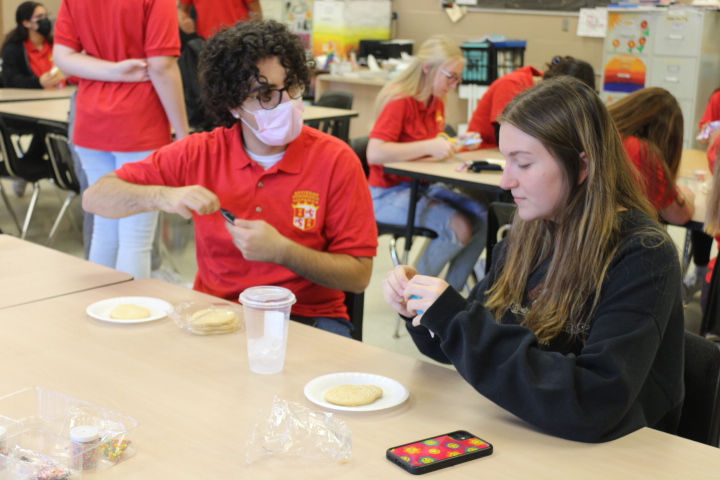 Farr and his friend decorate cookies on Nov. 2 for Dia de Muertos. Farr is attending his first year in Spanish National Honors Society and gets to experience this day with his new friends in the club. "I love decorating cookies and eating them today," Farr.

On Nov. 2, in what is now called Central Mexico, the Aztecs celebrated Día de Muertos that began in the 16th century, according to History.com. The Aztec celebrate this day with bonfires, dancing, and feasting. Currently, Día de Muertos is celebrated in Columbia, Ecuador, Honduras, El Salvador, Nicaragua, Peru, Venezuela, and United States. This week, the Spanish classes and the Spanish National Honor Society celebrated with their own versions of events.

Ms. Clare Andrade, celebrated Día de Muertos with her students in each of her classes. Students brought multiple dishes like empanadas and arepas for their class period. While eating the food, the class watched the movie Coco, which features a boy and his family celebrating Día de Muertos.

“I’m very happy to show the students these traditions because it’s teaching them more about other cultures,” Andrade said. “Every year I like to show my new students what Day of the Dead is like and I’m happy they are introduced to it.”

The Spanish National Honor Society hosted a celebration at their club meeting for the holiday on Nov. 2, with chips, drinks, and decorating cookies.  Alexa Green (‘22) and the other officers came to the club meeting early to set for the celebration, before they decorated cookies, they all watched an informational video on Día de Muertos. The classroom filled with laughter and busy students decorating their desserts.

“Day of the Dead really brings the club together. We make cookies together, we eat together, and we celebrate together,” Green said.

The adviser of Spanish National Honors Society, Ms. Pitcher’s last day was on Nov. 2. While they celebrated Day of the Dead, Enzo Deraspe (’22) and the club, also wished Ms. Pitcher a fair well and gave thanks to her role as a leader for the club.

“I’m really upset that Ms. Pitcher is leaving but at least we get to celebrate Day of the Dead with her,” Deraspe said.

Next year Ms. Andrade and Spanish National Honor Society plan to share and celebrate Día de Muertos with their students. Coming up the next Hispanic holiday, Día de Reyes (Three Kings’ Day), will be celebrated on Jan. 5. Just like Día de Muertos, it is an important holiday that was spread out through Spanish-speaking countries and the United States.