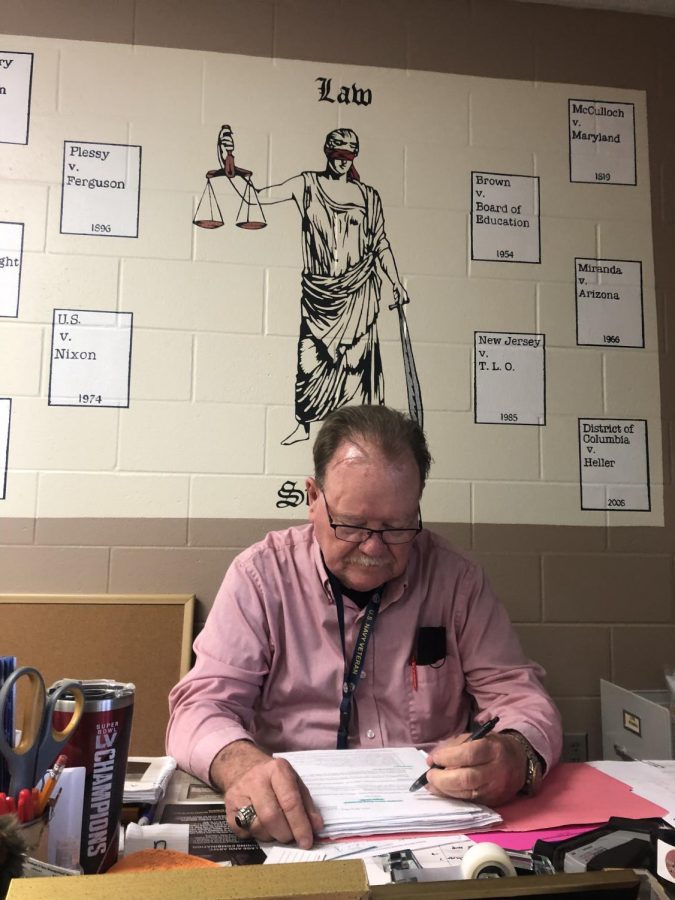 Mr. Black sits at his desk, grading papers to give back to his students.

In room 706, Economic Honors and future Government Honors students are educated by a teacher with the name Mr.Black, who appears to be a knowledgeable, grandfatherly figure. Throughout his 73 years on Earth, the former “bubblehead”, a common term used in the Navy to identify one who participates in submarine activity, has been able to develop a lifetime of stories worth sharing.

In 1966, the United States was enthralled in the Cold War. Mr.Black joined the Navy that year in hopes of beating the draft and dodging the obligation of fighting in Vietnam.

“If I had to go, I would have gone, but I didn’t feel like going to Vietnam. Thankfully I wasn’t in the hot war of Vietnam, which was fine because I spent most of my time in Scotland, Spain, and underwater all over the place. I was a clerk job, I handled security codes, and tech manuals. Today all of that would be online, but back then it was all hard copy,” Black said.

After being in the Navy for seven years, counting reserve time, Mr.Black felt that it was time to leave on a good note after years of beneficial opportunities that allowed  him to experience the world, as well as America through a different perspective.

“I was in Europe when we landed on the moon, I was there with Woodstock, I was there when Kent State happened, so I was able to see it through the eyes of the Europeans and how they viewed America. It was interesting,” Black said.

Through the Navy, Mr.Black was able to express his love for surfing, experiencing the waves of all over the world.

“ I love to surf. I wish I could still do it. Nothing like getting out on the water and riding a wave. I really truly enjoyed that. Last time I even gave it a real legitimate try was over 20 years ago,” Black said.

Once Mr.Black left the Navy in 1973 he attended Florida State University to major in history, while his minor was in Caribbean and Latin American Affairs.

“I planned on going into the foreign service and being a diplomat kind of thing, but at that time in our history we were more interested in CIA agents, and that really wasn’t what I wanted  to do. I thought that was the problem with us and Central America,” Black said.

The moment Mr.Black knew he wanted to be a teacher was on a cold, February day in Tallahassee, looking out of his apartment window, watching a family in need struggle.

“I was drinking my coffee, and I lived in an apartment building which was brand new and was next to a part of town known as Frenchtown. It was the ghetto. I was looking at the people and they were nailing down newspapers onto their floor to keep the heat in and the cold out, and I said, wow, there is something wrong with that. I think it was one of those eureka or aha moments, and I thought that I wanted to do something service related, and that’s when I solidified the fact that I wanted to be a teacher,” Black said.

Since he started his career, Mr.Black has taught every social studies class to have ever existed except for physcology.

“In AP I’ve taught AP World History, AP United States History, and AP Human Geography, which is my favorite because it covers everything,” Black said.

Entering his short lived retirement in his 50s, Mr.Black was finished being a Pinellas County middle school administrator, quickly realizing he wasn’t ready to end his career in education.

“My wife said, ‘You were a good teacher, why don’t you go back and try it again?’ and I eventually did, and I’ve been back 14 years, and I was here and then went to Anclote when they built it and then came back when my son went here. He graduated in 2020,” Black said.

COVID-19 interrupted Mr.Black’s retirement plans for 2020, leading him to rethink his decision, eventually leading to the extension of his employment.

“I said that I’m not going to go out that way. There is more to what I did, and I just feel empty leaving this way. So I taught last year and it was a weird year as well, and with the masks and all that craziness. So I said I’ll teach one more year. I just like what I do, I just enjoy it. I’ve enjoyed it, but I have no regrets. I like Mitchell, it’s fun. I’ve been at every end of it. Mitchell is obviously a very good school with socioeconomics, but I’ve been an administrator at some of the toughest schools in St Pete. I enjoyed those too, they were a different kind of intensity, a different kind of excitement. I liked being an administrator but I got tired of the politics in that,” Black said.

With retirement right around the corner, Mr.Black aspires to take his wife to Europe, a continent she’s never seen before. Taking the opportunity to travel while he still can, being born in 1948,  has not stopped Mr.Black from experiencing life as he pleases.

“Life has been good to me, I think I’m still pretty healthy, and in good shape for somebody my age. I don’t feel 73, I don’t think 73, people are surprised when I say how old I am,” Black said